What journalists really hate about your press release

If you’re wondering what journalists really think about press releases it’s probably a good idea to ask one.

Journalist Mark Walton was news editor and production editor at The Cumberland News so has seen a few press releases in his time. More recently he has been working for the Evening Standard and The Times as well as helping Intro with some of our projects.

As well as sharing his own experiences, Mark spoke to fellow journalists to come up with a list of things to avoid if you want your press release to be well received. 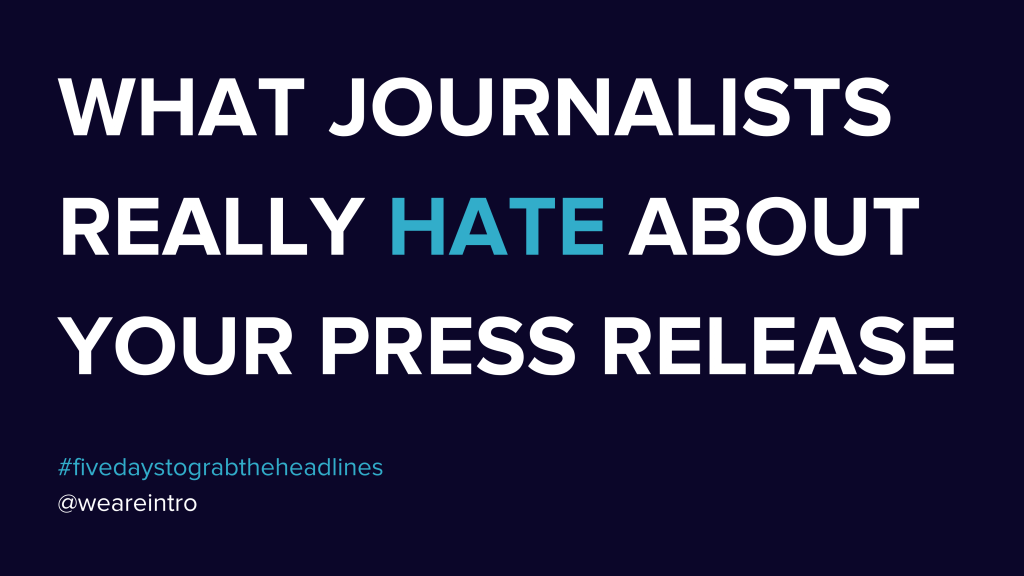 Press releases grease the wheels of the media industry but they can also be the bane of journalists’ lives.

So how can you get your message across and avoid yours heading straight to the recycling bin or delete button?

Is the story of interest outside your organisation? It might be amazing to your firm but does anyone else care?

Don’t waffle or bury the story

Journalists receive dozens of press releases and won’t spend much time trying to decipher a vague one. It shouldn’t be more than four or five paragraphs long.

Make sure your release is tailored to the outlet you’re contacting. Get your geography right – many organisations think Carlisle is in Scotland or a suburb of Newcastle, or confuse Cwmbran with Cumbria.

A pet hate of Mark McAlindon, video journalist at BBC Look North, is press releases that tell him about things that have already happened.

Don’t try to make something more than it is. And if you’re responding to genuinely bad news, bite the bullet and address the matter. Journalists will see through such attempts and it won’t help your credibility in the future.

Don’t use jargon or management-speak

This particularly irks award-winning Carlisle journalist and author Roger Lytollis: “I have never heard anyone say the word ‘upskill’. The only place I’ve ever read it is in press releases.”

Don’t get it wrong

Journalists like to think they write well and will be impressed by people who do the same. A misspelt or error-filled press release will get short shrift.

Very few releases appear in print or for broadcast as they are sent, and journalists will invariably want to get extra information. And for Mark McAlindon, as a television reporter, he needs people who are prepared to appear on camera.